Rapture of the deep: being an account of the further adventures of Jacky Faber, soldier, sailor, mermaid, spy by L.A. Meyer

Jacky is back, and another amazing adventure awaits. On what is to be the day she finally marries her one true love, Jacky is kidnapped by British Intelligence and force to serve another mission. This time she is off to the Caribbean to search for missing Spanish treasure. As usual, Jacky finds all sorts of trouble in those waters.

The latest installment in the Bloody Jack series is as wonderful as the previous tales.

The lightning thief by Rick Riordan ; read by Jesse Bernstein

Percy Jackson is not your regular twelve-year-old boy. For one thing, he has been expelled from every school he has attended. He’s not a bad kid. It’s just that odd things seem to happen when he is around. Percy is also has dyslexia and ADHD – two disorders that do not make a stellar student.

There is a reason that P 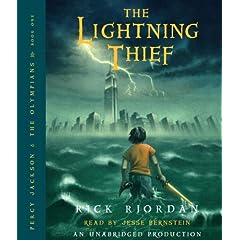 ercy’s life is so strange, and he is about to find it out. Percy is not an ordinary human; he is the son of a Greek god and, therefore, half human and half mortal.

Shortly after barely making it alive to Camp Halfblood, Percy is sent on a quest to keep World War III from starting. Percy, along with his friend Annabeth (another halfblood) and Grover (a satyr), travel from New York to Los Angeles, fighting mythical monsters along the way.

As I mentioned previously, I started listening to this book after trying three other audiobooks. I don’t like the narrator of this tale, but his style (or lack there of) didn’t keep me from being sucked in to the wonderful story. I’m already listening to the next book – Sea of Monsters.

This fantastic story is being made into a full feature film.
Posted by Ama