The curse of series fiction...

The books that I've recently finished are all part of series. It seems like most books are like that anymore. This can be a blessing when the series is well written from start to finish. Unfortunately, that doesn't always happen.

The Titan's curse : #3 by Rick Riordan 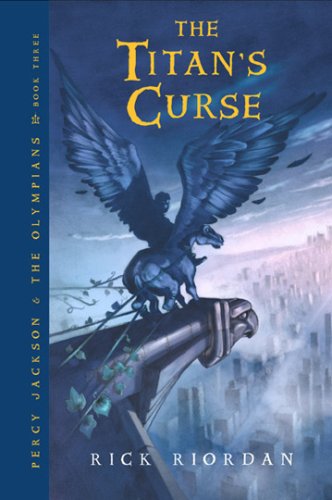 Book three in Riordan’s compelling Percy Jackson series was as action packed and full of adventure as the previous two stories. Percy sneaks his way on a quest to rescue his friend Annabeth and the goddess Artemis. Along the way they will battle more mythical creatures, talk to a few gods and goddesses, and even experience help from the long lost god Pan.

After finishing this book, I couldn’t wait to get my hands on the next in the series – to the point that I almost purchased it while shopping at Sam’s Club, even though I knew it would be waiting for me at work the next day (I ended up waiting and saving a few dollars). This series is definitely one of my favorite. I love how Riordan intermixes modern times with the lives and myths of the Greek gods and goddesses.

Fragile Eternity by Melissa Marr
This is also the third book in its series, which began with Wicked Lovely. As with the first book, this one focuses on Aislinn and her boyfriend, Seth. Aislinn is now the Summer Queen – an

immortal faerie. Seth is still a mortal. Tired of not being able to help his girlfriend when she is in trouble, of being babysat by the faeries from both the Summer and Dark Courts, and the growing closeness between Aislinn and Keenen (the Summer King), Seth seeks out a way to become immortal and spend eternity with Aislinn.

As I noted before, I liked the second book in this series (Ink Exchange) better than I did the first. This holds true with the third. I did finish the book, but there was a time or two that I contemplated not reading until the end. I was not as interested in the characters as I was with those in Ink Exchange. My overall feeling of the book was “ho hum”.

My sister G read the books, but I forget which she said was her favorite and why. I do recall that she read them out of order, so that may have influenced her feelings of the series. Guess I need to give her a call to talk about the books!

The fourth book, Radiant Shadows is due out on April 20. I’m not sure yet if I will place it on hold. Once I read a review or few I’ll decide.

I started reading this

book, a first novel of a new teen series, and made it about 1/3 of the way through before deciding to return it. Firstly, I couldn’t renew it as there was a hold on the title. Secondly, I just wasn’t getting in to the story.I do love the cover, though. The first few pages were fairly interesting, but after that I was bored. The writing wasn’t thrilling. I’ve too many books to read to waste time on something that bores me.


So…on to the next novel…
Posted by Ama