I only brought two books with me this trip, knowing that I will be picking up several ARC (advance reader copies) at the conference. Unfortunately, I finished reading both books before acquiring new ones to read! Thankfully that has since been rectified.

The first book I finished was The Battle of the Labyrinth: Percy Jackson and the Olympians #4 by Rick Riordan. Yet again, Riordan has written a masterful tale about

the Greek Gods and Goddesses and their children in modern times. It has been a few months since we left Percy and his friends at the end of book three. Percy breaks a new personal record and manages to be expelled from his new school after a fire breaks out during freshman orientation. After returning to Camp Halfblood for the summer (and to get out of NYC for a while…again), Percy finds that things there are worse than they were in December. Grover is close to losing his Searcher’s license (and he has a girlfriend), Annabeth and Clarisse have been working on a secret project. And Mr. D (Dionysius), the reluctant (and perpetually annoyed) camp director is off dealing with problems with minor gods and goddess.

Annabeth finally gains her quest. She, Percy, Tyson and Grover head into the fabled Labyrinth in hopes to save Camp Halfblood – and the world – from the rise of the ancient Titan ruler, Kronos.

This book offers so much for the reader.

Adventure? Check.
Romance? Check. At least on the upper elementary level. lol
Magic? Check.
A happy ending? Guess you will just have to read it to find out!

The other book I finished was The London Eye Mystery by Siobhan Dowd. My nearly 13 year old niece gave this to me to read. It is a current pick for the Youngstown English Festival. 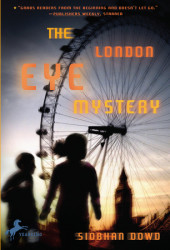 Ted and Kat’s Aunt Gloria and cousin Salim come to visit them before heading off to NYC from England. Salim wants to ride the London Eye – something he has never done before. When he disappears from the ride, the whole family is frantic. Ted and Kat decide to try and solve the mystery. It will take both of them to figure it out just what happened to Salim.

The book is told from Ted’s point of view, which makes it all the more interesting. While it isn’t actually said in the book, Ted appears to have a high functioning form of autism or Aspergser’s syndrome. He is extremely interested in all thing weather related, and hopes to be a meteorologist when he becomes an adult.

While I found it slow going, once I got hooked on the story (basically when Salim actually disappears), I didn’t want to put the book down. This is a great mystery!


I’m now reading the unpublished teen book In a Heartbeat by Loretta Ellsworth.

The copy I have is an uncorrected advance proof/ARC. That is one of the perks of attending library conferences. Lots of free books to obtain!
Posted by Ama