An echo in the bone by Diana Gabaldon

As I remarked, I finished listening to the most recent publication in the Outlander series. This makes for a very sad Ama. 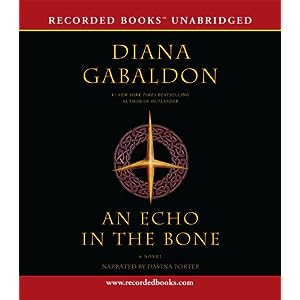 The novel takes up where the previous ended. Claire, Jamie and Ian are working their way to Scotland – with an unexpected detour of battle. Brianna, Roger and family are back in their own time period and settling into life at Lallybroch. Additionally, we follow the lives of Lord John Grey and his stepson, William, who is now a solider fighting for the British Army. The lives are more intertwined than ever, with plot twists and surprises popping up throughout the tales.

At times the transitions from one time period to another – and from one storyline to the next even within the same time period – are not done smoothly. This was a bit distracting; however, the tales that Gabaldon is weaving are so engaging that I was often sucked into them, thinking about what was going to happen next. Unfortunately, the ending of this edition continues this by not being much of an ending, but rather a series of loose threads waiting to be woven into the finish product.

I love the historical aspects of this series. Gabaldon brings the 1770s to life, placing the reader at the battles of the American Revolution and in Jenny and Ian Murray’s Scottish Highland home.
Posted by Ama