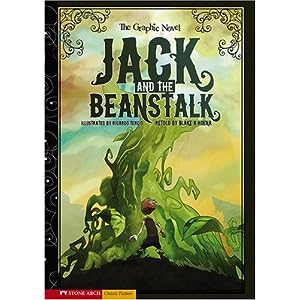 retold by Blake A. Hoena and illustrated by Ricardo Tercio, is a retelling of the story is much the same as others. Jack lives with his mother. They are poor. When their old cow stops giving milk, Jack must sell her. Instead of selling her for money, he trades her for a handful of magic beans. Those beans grow into a large beanstalk that Jack climbs to a castle in the sky. Jack evades Giant and steals from him. Giant eventually catches Jack stealing and chases him down the beanstalk. Jack cuts down the beanstalk and the Giant falls and dies. Cut. That’s a wrap. Let’s party.

This wonderful retelling is perfect for beginning or reluctant readers. With sparse text, the illustrations tell the story. The text is not complicated, and easily read by those who are at lower reading levels; however, older or higher level readers may find the text boring.

As anyone who has talked to me about books or has read past blog posts knows, I LOVE LOVE LOVE the Bloody Jack books. A patron who recently discovered them (not from me…this time) recommended a book to me, since she heard me gushing about Jacky’s adventures. The book she recommended was Boston Jane: An Adventure by Jennifer L. Holm.

Jane is a young, impressionable girl, living in Philadelphia in the early 1800s. Her mother died during her birth, so she is reared by her father, a physician. A tomboy, red-headed Jane is teased by a local girl, who points out the shabbiness of Jane’s home and that Jane will never be a society lady. At the encouragement of William, a handsome young physician who is completing his studies with her father, Jane begins studies at a local finishing school. When William leaves for the western costal territories, her continues to encourage Jane in her pursuit of being “a lady”. When she is fifteen, he proposes marriage and Jane persuades her father in to (very reluctantly) letting her travel to William.

After several months, Jane arrives, only to find that William left the area on a mission from the governor. As she waits his return, Jane must learn to live in the one cabin settlement with a bunch of men and to survive being “a lady” in the wild frontier.

The setting of the novel is beautiful. Often the novels I read that take place during this time period are set on the eastern part of the US or in Europe. It is refreshing to read of a new location! I also enjoyed the inclusion of background information after the end of the story.

Jane’s conflicting personality – the person she really is vs. the person she thinks she should be – is something that resonates throughout time, and goes beyond gender boundaries.

This book doesn’t hold a candle to the Bloody Jack books. There is some adventure, but not really a lot. The voyage to the western coast is skimmed over, with a few pockets of information. Life in the wild frontier is more descriptive, but not nearly as exciting as one would expect in an adventure book. The romances that take place are predictable, and, therefore, a bit boring.

And the cover…just plain yawn.

I was amazed that the author of this book not only won a Newbery honor (for Our Only May Amelia and Penny from Heaven- I haven’t read them, though) but that she is also the coauthor of the Baby Mouse series of graphic novels (which I adore). While I’ve handed Baby Mouse to many kids, I can’t imagine giving this book to most teens. They would never trust my judgment again!

ETA: Well, what do you know...this is a series! *faint* And, while the cover of the paperback I read is unappealing, the new covers are a bit better.
Posted by Ama