The Firefly Letters: A Suffragette's Journey to Cuba by Margarita Engle (ARC)

Those who appear to be free are sometimes imprisoned in their own way. That is one of the lessons of this short poetic book. Engle intertwines the stories of three women in Cuba: Fredrika – a Swedish noblewoman who gave up her family’s expectations and the man she loved for the freedom to travel the world; Cecilia – an African girl who was sold into slavery by her father and now lives, married to another slave, in Cuba; and Elena – a teenage Cuban girl whose family owns Cecilia and her husband, and who feels trapped inside her lavish home. 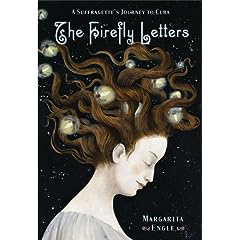 Engle bases her latest book on the life of Sweden’s first female novelist, Fredrika Bremer. Fredrika visited Cuba during 1851 and subsequently wrote about her experiences there. She did know a young slave woman named Cecilia, who acted as a translator, as Fredrika did not speak Spanish. The character of Elena is fictional; however her story is based in the reality of females of rich families during the time period.

Told in a prose style poetic format, the three stories (with a few pages “told” by Cecelia’s husband, Beni) are well woven. Using this format, reading is done fairly quickly. While I enjoyed the story well enough, I was a little put off by the fact that the style is exactly the same as the other book I’ve read by this author. 3 major characters. Prose style poetry. Based in Cuban history. Are all of her writings done the same? I plan to read the other two published books we have in our system…just so I can answer that question.

The copy of the book that I read was an Advanced Reader’s Copy. The book was published in March 2010.

Once was Lost by Sara Zarr

Sam is a pastor’s kid who is having a crisis of faith. Her mother is in rehab after driving drunk and being in an accident. Her father has time for everyone except for his family. Bills are piling up and the house is slowly falling apart. It’s the hottest summer in years. Sam is alone and lonely.

Then the unthinkable happens. A thirteen-year-old girl from their church goes missing. Sam’s dad is spending his time with the family – and with the twenty-something female Youth Minister. And Sam’s faith is shattered even more.

Can Sam find a way to fix her life, and reconcile with herself her lack of faith?

Told over a series of days, Sam’s story is expertly detailed. After playing the parent to her mother for the past few years, Sam is a teenager who needs her parents (and her faith) more than ever. All the while she is torn with confusion and grief over what has happened to their town. Sam’s voice is clearly heard throughout the book.

This was a March YA book group pick.

The Book of the Maidservant by Rebecca Barnhouse (audiobook)


Johanna is the young maidservant for Dame Margery Kempe – a self-proclaimed holy woman. When Dame Margery decides she must embark on a pilgrimage to Rome, she takes Johanna with her. Johanna must deal with the abuse – verbal and physical – from not only her mistress, but also other members of their traveling party. When the party decides to part ways with Dame Margery, Johanna is forced to stay with the other pilgrims, increasing her fear that she will never make it back to England. 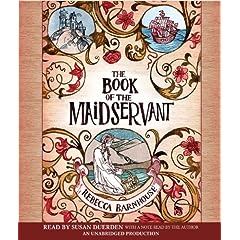 Full of detail about life in the 1400s, The Book of the Maidservant expertly outlines what the trip would have been like for a young maidservant, as well as the hospitality and difficulties travelers would have encountered. Told from Johanna’s view, the reader cannot help but feel moved by her fear of never seeing her family again, and appalled by how she is treated by most people she encounters.

The story is based on the descriptions of the maidservant in The Book of Margery Kempe, the first autobiography in English. Dame Margery had nothing good to say of her maidservant; Barnhouse has taken the opportunity to imagine what life might have been like for the young girl.
Posted by Ama