Shortly after Amos is born, his mother passes away. His father Jake, a trapper, returns a few months later to find out he now has a son. A baby would be a hindrance in the wilderness, so Amos’ father leaves him with family until he is older, even though he could rely on his gift of dowsing to support his family. 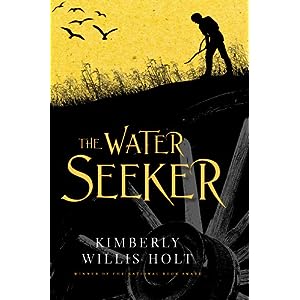 At first life is wonderful for Amos. His Aunt Rebecca cares for him as deeply as a mother could her own child and there are boys near his age for him to befriend. After an illness ruins the relationship between the nearby Native American tribe and Amos’ family’s mission and ultimately takes his beloved Aunt Rebecca’s life, Amos and his uncle are cared for by a neighbor until, ultimately, his father returns.

With the trapping livelihood winding to a close, Jake, his new wife and Amos embark on another adventure – traveling along the Oregon Trail. It is here that Amos must travel not only the harsh trail roads, but the sometimes harsher road from childhood to adulthood.

It has taken me a few days to process this story. It was a compelling tale. I wanted to continue reading about Amos and his life, especially after they started towards Oregon.

Of the books I’ve read this year that are eligible for the Newbery award, this one sticks out the most. However, there is an issue as to who the audience is for this novel.
Posted by Ama