When high school rock band Dumb performs on the front steps of their school, only two students stay for the whole impromptu show. Piper, one of those students, cheers loudly at the end, even though she can’t exactly hear the music. Piper is deaf. 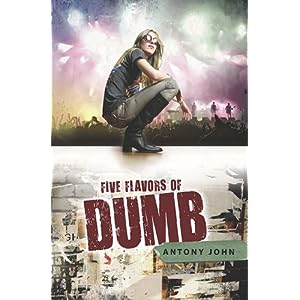 This little fact is even more interesting when Piper agrees to become the manager for Dumb, something that pretty much everyone who knows her thinks is, well, dumb. Can Piper take a trio of musicians and turn them into a rock band worthy of a contract?

Likes
Piper is well written. Throughout the book she grew from being very insecure about herself and her place in both her family and the world at large to standing up for herself and what she believes is right. Her growing frustrations with how she is treated finally come to a head. Instead of destroying her relationships with her family, she starts working towards making them better.

I don’t know what it feels like to be unable to hear, but I have recently learned more about deaf culture. What little I do know – which I readily admit isn’t much – helped me to understand the whys of Piper’s feelings.

The interactions between the characters, especially Piper and her brother and Piper and Ed.

Dislikes
While the change in Piper’s demeanor doesn’t happen overnight, it does happen rather quickly. I’d venture to say too quickly.

Piper’s baby sister. The character seemed to only be a bit of the background, just there to further feed the flames of discord between Piper and her parents.