Will Grayson 1 is floating through life, trying to lay low on the radar and to keep quiet. He and Tiny have been friends for years, but Will 1 isn’t always happy about the friendship. After he writes – and signs – a letter to the school newspaper about Tiny and Tiny’s homosexuality, Will 1 loses his new group of friends and slides back into a semi-comfortable friendship with Tiny. 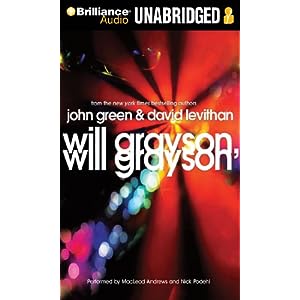 Will Grayson 2 has a bad attitude and a tendency to see everything through black colored glasses. After his only so called friend, Maura, commits a seriously wicked act, he meets Will 1…and Tiny Cooper.

Tiny Cooper is big in every way. The very portly teen is boisterous, outspoken, loud and fabulous. He’s also gay. Tiny constantly falls in love, something that annoys his closest friends. He seems to be very self-centered and focus, going as far as to write a musical about his life.

The two Will Graysons are both trying to find their way in life. With the help of Tiny Cooper, they just might get on the right track.

I listened to this book. What is notable about the book itself is that it is by two authors. Each author wrote from one Will Grayson’s view. The audiobook has two narrators. This was fantastic.

The character of Tiny Cooper seemed like too many stereotypes of a homosexual male all wrapped up in one character.

The references to Tiny’s not so tiny size. There are so many. We get it. He’s big. Everyone comments on it. A lot. Too much. Even too much to show that it is commented on too much.

As stated above, there are two authors. You can tell. While both storylines converged into one story, there was still a separation noticeable in the tale.