It’s Wednesday – and I am back in town – so that means it is time for another edition of Waiting on Wednesday!

This Wednesday I am waiting for the newest book in the Outlander series to be published. Specifically in audiobook, since that is how I’ve read the rest.

Good news for me, the book comes out this fall – September 22. Even better news for me, according to Amazon.com, the audio version is set to be released on September 30. Here’s hoping that my library buys it! By the time I’m able to get my hands on a free copy, I should actually be ready for it. I still have one more book in the series that I still need to listen to, and it is going into my car’s CD player when I leave work tonight.

Here’s the synopsis of An Echo in the Bone by Diana Gabaldon (text pasted below) – the seventh book of her fantastic Outlander series. 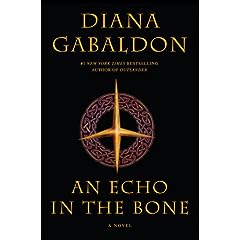 Diana Gabaldon’s brilliant storytelling has captivated millions of readers in her bestselling and award-winning Outlander saga. Now, in An Echo in the Bone, the enormously anticipated seventh volume, Gabaldon continues the extraordinary story of the eighteenth-century Scotsman Jamie Fraser and his twentieth-century time-traveling wife, Claire Randall.

Jamie Fraser, former Jacobite and reluctant rebel, is already certain of three things about the American rebellion: The Americans will win, fighting on the side of victory is no guarantee of survival, and he’d rather die than have to face his illegitimate son–a young lieutenant in the British army–across the barrel of a gun.

Claire Randall knows that the Americans will win, too, but not what the ultimate price may be. That price won’t include Jamie’s life or his happiness, though–not if she has anything to say about it.

Meanwhile, in the relative safety of the twentieth century, Jamie and Claire’s daughter, Brianna, and her husband, Roger MacKenzie, have resettled in a historic Scottish home where, across a chasm of two centuries, the unfolding drama of Brianna’s parents’ story comes to life through Claire’s letters. The fragile pages reveal Claire’s love for battle-scarred Jamie Fraser and their flight from North Carolina to the high seas, where they encounter privateers and ocean battles–as Brianna and Roger search for clues not only to Claire’s fate but to their own. Because the future of the MacKenzie family in the Highlands is mysteriously, irrevocably, and intimately entwined with life and death in war-torn colonial America.

With stunning cameos of historical characters from Benedict Arnold to Benjamin Franklin, An Echo in the Bone is a soaring masterpiece of imagination, insight, character, and adventure–a novel that echoes in the mind long after the last page is turned.

Oh my, I cannot wait. I'm nearly finished reading A Breath of Snow and Ashes...what am I going to do in the meantime??

I was just talking about these books the other day! And I sent an email to my library to confirm that I am on the list for this book! Cannot wait!