Percy Jackson and the Olympians: Sea of Monsters by Rick Riordan

Percy has managed to survive to the last day of the school year without being expelled. This is a first! Unfortunately, during the final exam for Dodgeball, events take place that changes Percy’s life – and ensures that this school year will end just like the previous ones. 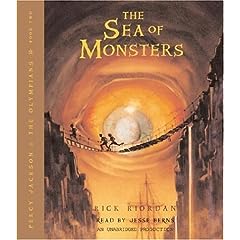 After escaping to Camp Halfblood, Percy is stunned to find out that his friend Tyson is not only a Cyclops, but also his half brother. Also shocking is the condition of the camp due to the poisoning of Thalia’s tree. Then there are the disturbing dreams about Grover being in trouble.

Can Percy, Annabeth and Tyson save both Grover and the camp before it’s too late?

Another action packed tale in the series, this story continues about nine months after the end of the first one. Riordan weaves a wonderful continuation of Greek mythologies in the modern world. If only there was a different narrator…

Something else I wanted to mention is about audiobooks in general. This one brought it to mind. I really wish that every CD of an audiobook would start and end with an announcement of what disc you are listening to. I think having that information actually helps with the flow of the story. Especially if, like me, you have a CD player that automatically starts track 1 after the final tract ends. Talk about confusing!
Posted by Ama