Ah ha! or The Heart of the Matter

I knew I wrote a bit about the books I recently finished! If only I would have more carefully looked over a few of my recent posts I would have seen that.

So...without much further ado, I bring you reviews of In a Heartbeat and Charles and Emma.

In a Heartbeat by Loretta Ellsworth (ARC copy)
I started reading this book while I was in Boston. It was one that I picked up from a vendor, hence it being an Advance Reader Copy. I wanted to finish it before getting home so I could pass it along to my friend. 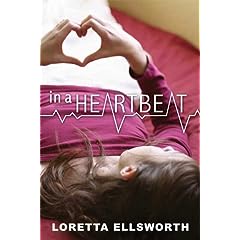 Two teenagers from different states are forever linked. When 17-year-old Eagan hits her head during pre-competition practice, not only does she lose her chance at ice skating stardom, but also her life. Fourteen-year-old Amelia needs a new heart, which she gets from Eagan.

The chapters switch back and forth between Eagan and Amelia, as each girl deals with the changes; Eagan with being dead, and Amelia with being alive. As Amelia discovers more about the changes in her personality, the desire to meet her heart donor’s family grows.

The idea of the story is interesting, and some of the writing was well done; however, it could have been pieced together more seamlessly. I couldn’t connect to the characters, and was left with an overall blah feeling for the story. After reading a bit about why the author wrote the story, I was convinced that it was more of a therapeutic endeavor than a literary quest.

Charles and Emma: the Darwins' leap of faith by Deborah Heiligman.

Charles Darwin’s theories on the origin of life left him questioning faith and God’s hand in creation. His wife was staunchly religious, and believed in a loving God who created the world (albeit not in seven days). Yet, even with this huge disagreement in beliefs, the two had a very loving and devoted relationship that lasted until the end of their lives. This non-fiction book focuses on more on the relationship between Charles and his beloved Emma than on the science of Darwinism.

As I wrote on my other blog: 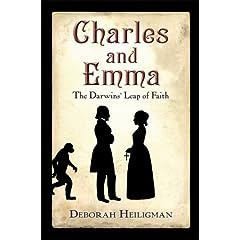 What an amazing love story! The two were completely devoted to one another, despite their differing opinions about religion and science.

When I was in Boston, I was had the chance to hear the author speak, as she won the Morris award for the book (in the category of best nonfiction for young adults). There were many in the audience, myself included, when she remarked on the adage "write what you know". She said that she likes to write, not what she knows, but what she wants to know more about; however, with this book she realized that she was also writing what she knew, as she, too, has a wonderful, devoted relationship with her husband. Coincidentally, her husband is a science-minded person (and Pulitzer Prize winning author of The Beak of the Finch: A Story of Evolution in Our Time) and she has a degree in religious studies.


The only thing lacking in this book is that I wanted to know more about the couple and their children. I would love to know what modern speculations are about Charles’ lifelong illness and the cause of their daughter Annie’s death.

My other complaint isn’t about that is missing in the book, but rather a style element that just annoys me. That would be how Heiligman pluralizes Charles. She uses Charles’s whereas I’ve always liked the cleaner look of Charles’. Both are correct, so it is just a pet peeve of mine.

As noted, Charles and Emma was the winner of the first-ever YALSA Excellence in Nonfiction Award. It also received a Michael L. Printz Honor Award.
Posted by Ama