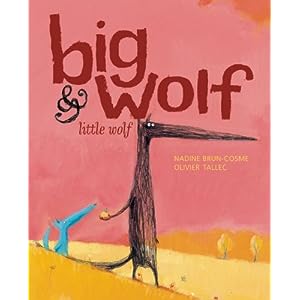 Big Wolf lives alone under a tree. One day another wolf arrives. This one is smaller than Big Wolf. Little Wolf spends the day and night Big Wolf. Instead of welcoming the visitor, Big Wolf only shares small bits with Little Wolf, treating him more like an intruder than a guest. When Little Wolf goes away, however, Big Wolf realizes how lonely it is without him and wishes he was more welcoming to his guest. One day Little Wolf returns, and the two admit the realization that life is better shared with a friend.

This is a lovely tale of sharing. Who can say that they’ve truly never felt annoyed to share a bit of their life with another? Small children often go through the “Mine!” stage. This story shows that, while we all feel that way from time to time, it is much better to share.