Into the Wild Nerd Yonder

Into the Wild Nerd Yonder: My Life on the Dork Side by Julie Halpern

Being the cool chick has never come easily to Jessie, a self-proclaimed mathelete. Instead she has gone through school being cool by association. Her older brother is a punk rocker, and her two best friends keep her social life active (even if she is often ignored by those around them). But when one of her best friends hooks up with her long time crush (and brother’s bandmate) Van, Jessie finds herself looking for new people to hang out with at school. This leads to a bit of self-confliction and reflection, as her new friends aren’t exactly considered “cool”. Is a steady date of playing Dungeons and Dragons every Friday night considered cool? Being in the marching band? Can Jessie embrace her true geek form and announce to the world that she is proud to be a nerd? 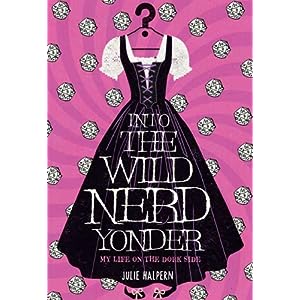 The story is fluff without being too fluffy. There are a few instances of seriousness (when the ex-bff gives Van a BJ…and the STD scare afterwards), but overall it is just a story about a teenage girl realizing her friends aren’t as great as she thought and finding out that she doesn’t need them to have a great time.

Jessie is funny. I love some of her lines. In fact, as I was reading the story, I was also chatting with a friend via IM. I quoted several lines of the book to her. I cracked up laughing as I read parts of the book.

Jessie seems real. She talks like a teen. She acts like a teen. She isn’t rebellious, or suicidal or anything like that. She has a great relationship with her brother and parents – but still gets annoyed with them, like most teens do with their family.

Between reading this book and a documentary I read watched last week, I kinda wanna play Dungeons and Dragons, and go to one of those role playing D&D type weekends. Kinda. Sorta. Maybe.

Perhaps that’s not really all that bad. :->
Posted by Ama