This series of books, published by Picture Window Books (Capstone Publishers), were translated from Italian and released this year. Each book contains special features after the story: questions about the story, a glossary, and information on writing your own fairy tale. These features make the books particularly useful for a classroom or homeschool setting.

Each of the eight books is illustrated by a different artist, lending them to have different appearances. The only exception is Hansel and Gretel and Snow White. Both of those are illustrated by the same artist.

Since there are eight books in the series, I am going to split them over several blog posts. Keep an eye out for next week’s edition of Picture Book Promos! 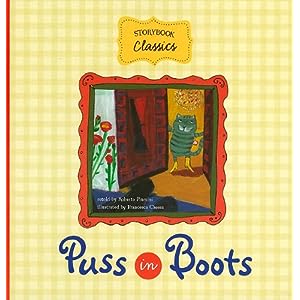 Upon his deathbed a miller gives his youngest of three sons the family cat. The son doesn’t know how he will survive with only a cat – no farm or mill. However, the cat tells the son he can make everything wonderful, if only he is given a pair of boots and a nice bag.

With his new boots and a good bag, the cat proceeds to catch gifts and bring them to a nearby king, saying that the gifts are from his master, a great lord. After a few months the king and his daughter by chance meet the miller’s youngest son, and are tricked by the cat in to believing that the son is indeed a wealthy lord.

The colorful illustrations (I think they are done in oil or acrylic paints) skillfully accompany this retelling of a classic fairy tale. The text has a nice flow to it, making it easy to read aloud. 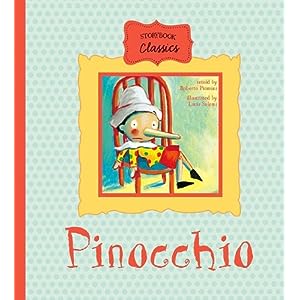 The story of a wooden puppet who wants to be a real boy is a familiar tale to many. Pinocchio is a good boy – for a puppet – but he is easily distracted by others. Because of this fault, he finds himself in trouble after trouble, including being robbed, becoming a donkey, and being swallowed by a shark. Will Pinocchio ever get his wish to become a real live boy?

Salemi’s illustrations are bright and colorful, making them appealing. The text of the story is easy to read; however, the tale does not flow well. This could be due to the author’s attempt to put in as much detail as possible from the original story.
Posted by Ama