Give me your tired, your poor, your huddled masses yearning to be free...

Denied, Detained, Deported: Stories from the Dark Side of American Immigration by Ann Bausum

The United States has a long history of immigration. It is a nation essentially made up of immigrants; however, it has not always been welcoming to immigrants. 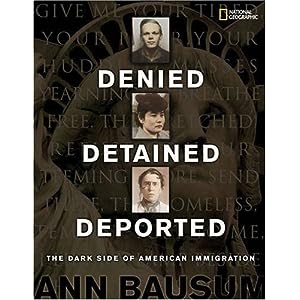 This book tells three specific stories of the government’s wrongful treatment of immigrants, as well as outlining the treatment of many groups of people. In 1919 Alexander Berkman and Emma Goldman were deported because of their political beliefs. During WWII, the Karliners, a Jewish family fleeing Nazi rule in Europe, were one of hundreds of families denied access to the United States – even though they could see the nation’s shores from luxury liner docked off the coast of Florida. Instead they were returned to Europe, where many did not survive the war. Also during WWII, the Japanese American Matsuda family was sent from their thriving strawberry farm to live in prison camps. It didn’t matter if they were born in the US. The government considered them a threat.


Likes:
History. Even if it isn’t about happy events, I still enjoy learning more about the history of immigration in the United States.

The overall feeling that the United States has done very little positive by the way of immigration.

It is natural to draw connections between the past treatment of immigrants and the treatment of them today. The author briefly mentions some of these same connections. Even before I read that section of the book, I was already thinking that it isn’t much better today.
Posted by Ama