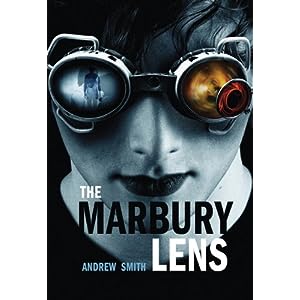 Recently an audiobook catalog arrived on my desk. This is not an unusual occurrence. I could probably wallpaper a few mansions with the catalogs that are given to me. Usually I toss them straight into the recycling bin. I didn’t with this audiobook catalog, though. What caught my eye was the cover of a book I want to read: The Marbury Lens by Andrew Smith.

I had the opportunity to speak with the author at the YALSA Coffee Klatch in June. I very much enjoyed his book Ghost Medicine (and told him that as well). However, this book is a completely different genre of teen fiction.

Sixteen-year-old Jack gets drunk and is in the wrong place at the wrong time. He is kidnapped. He escapes, narrowly. The only person he tells is his best friend, Conner. When they arrive in London as planned for summer break, a stranger hands Jack a pair of glasses. Through the lenses, he sees another world called Marbury.

There is war in Marbury. It is a desolate and murderous place where Jack is responsible for the survival of two younger boys. Conner is there, too. But he’s trying to kill them.

Meanwhile, Jack is falling in love with an English girl, and afraid he’s losing his mind.

Andrew Smith has written his most beautiful and personal novel yet, as he explores the nightmarish outer limits of what trauma can do to our bodies and our minds.


This book comes out on November 9. What a lovely (belated) birthday gift!
Posted by Ama