Vane Kattalakis isn’t what you think by looking at him. Sure, he is one fine specimen of a man. But that hunky exterior hides his wolf nature. Vane is a Were-Hunter wolf. Unfortunately for him, his pack is out for his blood. 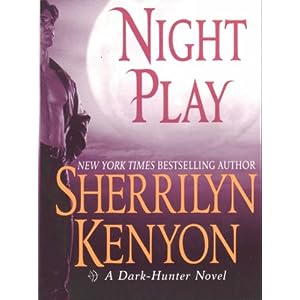 Just to add a bit of complication to his life, Vane finds himself attached to Bride, who just happens to be human. Can Vane convince Bride to be his mate – and that his world is indeed real?

There’s a lot of humor in this book. An example: Bride’s parents are both vets. Her father is even well known for urging people to neuter or spay their pets. This is a joke that comes up often.

But…in many ways it is way to similar to the other books in the series. Not my favorite, but not at the complete bottom of the list either.

Unleash the Night by Sherrilyn Kenyon 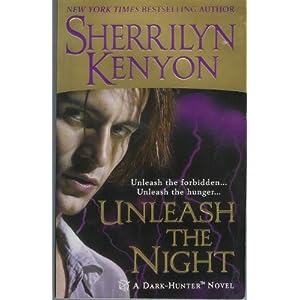 Wren Tigarian is an outcast even amongst the outcasts who live at Sanctuary. A blend of two were-animals – snow leopard and white tiger – he was shunned by his family at birth, and barely taught how to live with his powers – even by those who took him in when orphaned. Now he is quiet, fearful and quick to lash out at those around him. A complete loner.

Daughter of a senator, Marguerite grew up in a wealthy world that she never quite fit in with. Missing her study partner, Nick, she talks the rest of their study group in to “slumming” it by going to the bar he dearly loved. It is there that she meets the stunning Wren.

When lies about the death of his parents at his own hands lead to a death sentence to be proclaimed, Maggie and Wren must find a way to prove his innocence while staying alive.

This books was...well, ok. Honestly, even for a romance novel it felt like there were too many sex scenes and not enough plot and character development. It's my least favorite of the series so far.

Dark Side of the Moon by Sherrilyn Kenyon

Susan was one a top investigating reporter. After a major news scandal, she is now a top reporter…for a tabloid. When the lead her boss sends her on and a frantic call from her best friend both end up being about the same thing, Susan finds herself immersed in the world of Dark Hunters, Daimons and Were-animals. She also finds that she’s falling for Ravyn, a Dark Hunter who happens also be a Were-leopard. The least of their problems? She’s allergic to cats.

Most of the books in this series that I’ve read so far have been set in the American South, primarily in New Orleans. This one, however, takes us to the opposite side of the country. Seattle.

As with the other books, there’s a lot of humor. There are also some revelations about some of the other reoccurring characters of the series. Unlike the other Dark Hunter novels I’ve read that feature Were-animals, this one actually highlights a Dark Hunter, instead of just having one as a background character.
Posted by Ama