One of these things is not like the other

Seize the Night by Sherrilyn Kenyon

A loner even in a world of loners, Valerius has a reputation for being distant and patronizing at best. Hated by most of the Dark Hunters, Squires and everyone else, he has come to terms with his fate. The Fates, however, have a surprise in store for him. Her name is Tabitha, and her twin sister’s husband considers Valerius to be his greatest enemy (besides Daimons, of course). 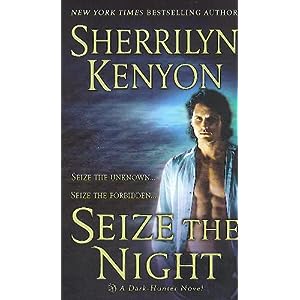 Often considered to be the crazy one in a family that counts a voodoo priestess, a sorceress, and a gypsy fortune teller amongst its members, vampire hunter Tabitha is nearly as deadly to daimons as the Dark Hunters. After deflecting a major Daimon attack – and accidentally stabbing Valerius in the meantime (she thought he was a Daimon), she finds herself in quite the quandary.

The two couldn’t be more different. Impeccably dressed, serious Valerius. Goth chick, fun loving Tabitha. But as they fight to rid New Orleans of an ancient demi-god with a major grudge against Tabitha’s twin and the influx of Daimons he brings along with him, the two find they are falling more in love.


I think this is one of the better written books of the series. There seemed to be a bit less repetition than previous books, which is always good. Plus, there are some major happenings in this novel that affect the whole series…and I don’t just mean the relationship between Tabitha and Valerius.
Posted by Ama