a trio of audiobooks

As I am nearly halfway through my current audiobook, I should probably write reviews for the previous three. The three books cover a variety of age ranges. While I didn’t quite finish one of the books, I am still going to tell you about it, as I ejected the disc towards the end of the final CD.

The Mists of Avalon, book two: The High Queen by Marion Zimmer Bradley 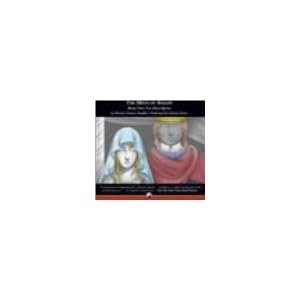 In the second part of tale, Morgaine leaves her son behind in Lot’s court, to be raised by her aunt Morgause, and travels to the court of the High King, her brother Arthur. Arthur marries the shy Gwenhwyfar, though his mother knows that the young princess is deeply in love with Arthur’s closest companion, Lancelot. As the years flow by, Morgaine attempts to return to Avalon, only to find it is closed to her. Gwenhwyfar, unable to carry a child longer than a few months – on the two occasions she does become pregnant – becomes more deeply attached to Lancelot, as he does to her. Her deep religious convictions enable her to convince Arthur to put aside the Dragon banner of Avalon, therefore breaking his oath to those who put him on his throne.

This continuation is read by Davina Porter. As to be expected, she does a fantastic job narrating the tale. I’m currently listening to the third book in the series.

This series is written for adults.


An abundance of Katherines by John Green 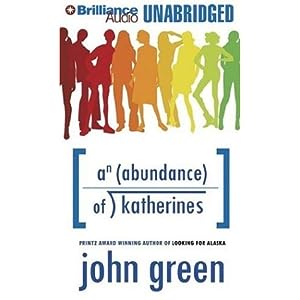 A child prodigy, Colin has many idiosyncrasies, such as a love of anagramming and being able to anagram any word or phrase in his head. To add to his peculiarities, Colin has had 19 girlfriends. All of whom have shared the same first name: Katherine.

When K-19 breaks up with Colin, he is devastated. Adding to his heartbreak, he feels the overwhelming need to be a genius – not just a former child prodigy. His best friend has a perfect solution. Road trip.

The duo leaves Chicago and end up in a tiny Tennessee town, where they find several surprises and more adventure than one would expect in such a small place. Along the way, both Colin and Hassan learn a few things about who they really are.

The story was interesting. I can understand why John Green’s writing is so appealing to teens. The narrator was OK. His voice sounded familiar. After checking, I realized that my suspicions were correct. He also narrated Looking for Alaska, another John Green novel.

This book is written for teens.

School of fear by Gitty Daneshvari

Everybody’s afraid of something. 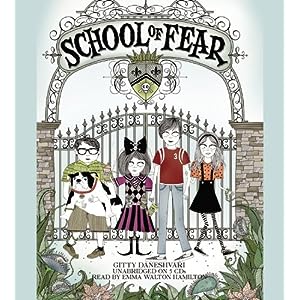 This is the story of four children who have extreme fears. Their families send them to a super-secret school called School of Fear in hopes to rehabilitate them, allowing the children – and their families to live normal lives.

When their extremely odd teacher unexpectedly dies, it is up to the four children to work together – and against their personal fears – to save her beloved pet dog, Macaroni.

All I can say is that I did make it through nearly all of the audiobook before I finally decided I could. not. take. any. more.

This is a children’s book series.
Posted by Ama

Yikes! Good name for a dog at least!