Gaurdian of the dead

Guardian of the dead by Karen Healey.

While her parents are on a vacation of a lifetime, Ellie is spending a year at a boarding school located on New Zealand’s South Island. After accidentally bumping into her classmate Mark, odd things start happening. When Kevin, her closest friend, talks her in to helping with the local university’s production of A Midsummer Night’s Dream, Ellie reluctantly agrees. There she meets the stunningly beautiful – and stunningly rude – Reka, who only has eyes for Kevin. Ellie knows there is something not right with how Kevin acts around Reka, but can’t figure out what it is. 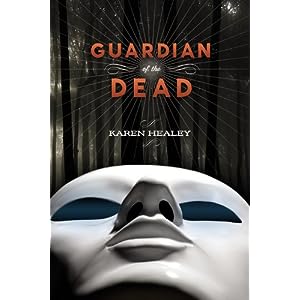 Then she discovers a world she previously couldn’t see. A supernatural world where myths and legends are real, and Ellie is about to walk hip deep in the trouble brewing. Can she do anything to save those closest to her?

Likes
The mythology. I love myths and legends, but know little of Maori mythology.

The characters. Ellie and Mark were both richly drawn. I would have liked a little more depth on some of the other characters, though.

I don’t know much about Maori mythologies. While I’ve read many myths and fairytales, most of them have been European. So, I found myself often confused by the names and myths in this novel. I wonder if it would also confuse most American teens reading it.

I was a little annoyed by Ellie and her view of herself. I wanted to keep telling her to have a little more self confidence. On the other hand, it made her a bit more real.

I’m not sure who I would suggest this book.