This review is by guest reviewer/blogger Sharon.

This is yet another romance novel, considered a historical romance due to the time period in which it takes place. A typical romance in that boy meets girl, has his way with her, but girl is not happy about it and runs from him. We then follow along as their relationship, or lack of relationship, continues. I had a hard time getting into it, but I do not think this was any fault of the book, as I was having a rough time in my personal life when I picked it up. I let it sit for a week or two before I attempted it again and picked up where I left off, approximately 100 pages in. 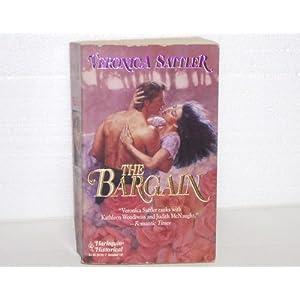 For me, about halfway through, I felt the book could have ended satisfactorily. But the author continued and created other problems and solutions to them. There was one that was eluded to near the beginning of the book but did not get resolved until the last pages, but in reality, this element could have been removed if the book was only half the size. While these problems did add some interest, as well as thickness to the book, I’m not sure if we really needed all that to get to the resolution. Of course, the author would have handled things differently to get to the end, but the ending could have ultimately been the same.
Posted by Ama