Another illustrator who is part of the Caldecott Repeat Winners Club is Robert McCloskey. Who hasn’t heard of Make Way for Ducklings, winner of the 1942 Caldecott award? Sixteen years later, McCloskey won the award again for Time of Wonder. 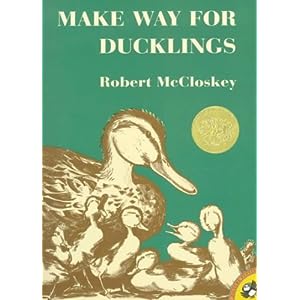 Starting with the front end pages, the illustrations for Make Way for Ducklings catches your eye and warms your hear. The adorable sepia toned drawings of a ducking hatching from his shell and proudly walking away sets the tone for the picture book. Even more than 65 years later, the Boston scenery depicted is still recognizable (I can vouch for this, having been to the same area of Boston just last January). The illustrations are full of personality. The Mallard family’s trip to their new home is artfully depicted by an expert hand. It is no surprise that this book is beloved by so many.

In the section on Make Way for Ducklings in A Caldecott Celebration: Seven Artists and Their Paths to the Caldecott Medal by Leonard S. Marcus, McCloskey was quoted as saying that he wasn’t trying for “exact duplication but a feel of the place…”. That he perfectly achieved.

Years – and three Caldecott Honors – later, McCloskey won the 1958 Caldecott award. This time for Time of Wonder. With beautiful, vibrant watercolor paintings, McCloskey portrays summer life on a small island in Maine from the early summer rain and burgeoning green fiddleheads to the late summer hurricane season and mixed feelings of leaving for mainland life. Timeless illustrations decorate each page with people, animals and scenes of the ocean surrounding the island’s summer inhabitants.
Posted by Ama