The coming of the dragon by Rebecca Barnhouse; read by Robin Sachs.

Rune arrived by sea, an infant floating in a boat with only a shield, a sword and a chainmail shirt. Some in the village argued that he was an offering to the gods and should be left for dead. Others argued that he was a child in need. King Beowulf decides. Amma, who had been waiting by the water, takes the child and raises him. 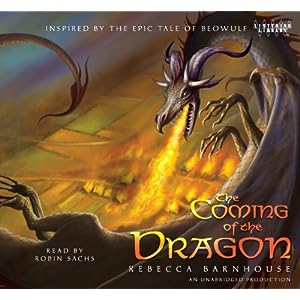 Years have passed and the baby is now a teenager. Rune lives with Amma on a farm. He, like Amma, is an outsider, and is treated thusly by most. When a dragon comes and destroys parts of the kingdom, killing many – including Amma – Rune vows revenge. The time has come for Rune to become a man and prove to everyone he is worthy of his sword.

The extension of a Beowulf story. Barnhouse has taken an epic tale and expounded on the events of Beowulf’s final years.

I’m not completely sure who the audience is for this book. It doesn’t really read like a children’s book, and doesn’t quite have the interest of a teen book. The level itself is fine for upper elementary through middle school.

The narrator. He wasn’t very good at distinguishing between characters voices. Plus all the women sounded more like men. Bleh.

Overall the story was interesting enough, but I was bored too often for my likes.
Posted by Ama