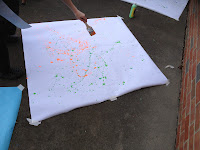 The temperature in Northeast Ohio hit nearly 85 last week. Luckily for me, this happened on the day I had an abstract art program planned.

I had seriously considered cancelling the program, as I only had one person registered, but decided to just go ahead and put it on as long as he came.  I knew that his younger brother, a second grader who was a few grades below the programs stated age range, was also interested in participating.  Luckily I came across the perfect idea that inspired our project. 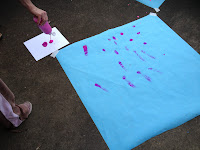 The program, called Focus on Art: Abstract, is geared for students in grades 5-12.  One of the artists I wanted to center on was Jackson Pollock – specifically his action style of painting.  Knowing that I had a younger group I wanted something that would appeal to everyone.  I found it the night before the program. 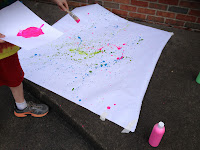 I can’t believe I didn’t pin it to my Focus on Art - Abstract Pinterest board!  Ugh!!

Basically, the concept was to make splatter paintings similar to Pollock's but without the mess.  This is achieved by putting the canvas/paper into a box. 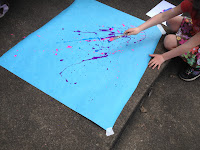 So, that was my inspiration.  What we actually ended up doing was taking the project outside to an area where the paint wouldn’t matter (much) and making the paintings on a larger scale than a typical box could handle.  They were still smaller than most of Pollock's! 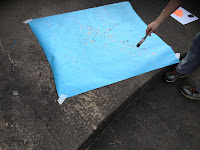 All of these supplies are ones that I have on hand at work.  Set up wouldn’t take long to do…once the family showed for the program. 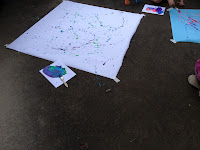 About an hour before the program a mom called to register her son.  Luckily, I had plenty of supplies available. They were the first to arrive.  She also had her young daughter.  Moments later a tweenaged girl arrived. Then the other family.  Including the younger siblings, I had six kids.  They ranged from preschool to sixth grade.  I briefly explained Pollock’s work and what we were going to do.  We then set up and the kids went to town flinging paint.  It was beautiful. Messy, but still beautiful. 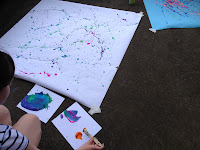 Since there was no way the paintings would be dry before the library closed, I let the parents know they could pick up the artwork any time after the next day. This made them quite happy, as that meant no wet paint in their vehicles. 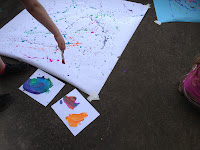 While it was sunny and absolutely gorgeous outside, it was also rather windy.  The masking tape helped to keep the paper in place, but the wind was still able to pick it up at times.  Additionally, leaves and other bits of nature debris would fall into the paintings.  I kept telling the kids that this was OK and to consider it part of the art, but they weren't easily convinced. 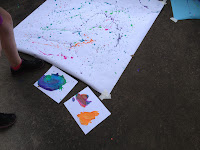 And now…for the rest of the photos. The blue paper was scrap bulletin board paper.  I gave that to the younger attendees. 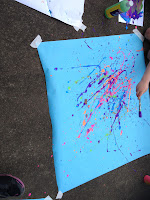 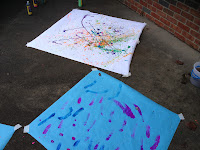 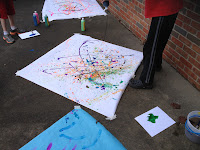 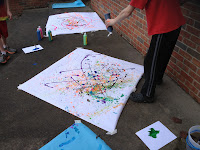 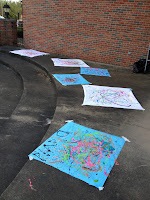 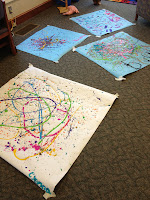 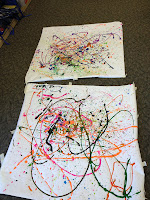