I thought I’ve finished more than three books since last week. Perhaps it only feels that way because of the whole being sick thing (I have bronchititis). Or perhaps it is because I’ve started a few different books over the last week.

Let’s start with the audiobook.

Little house on the prairie by Laura Ingalls Wilder. 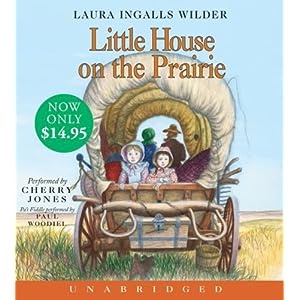 As with the first audiobook of this series, this installment is narrated by Cherry Jones.

Pa feels that the Big Woods are getting too crowded and populated, so he, Ma, Mary, and Baby Carrie all travel to the prairies – and Indian Country – to settle. They take a covered wagon all the way from Wisconsin to Kansas, where Pa builds a little log house for the family. While there they encounter malaria, prairie grass fire, and Indians. When Pa finds out that the government has sent soldiers to move some settlers out of the Indian country, he decides to pack up the family and move elsewhere.

The events take place just over a year’s worth of time.

I enjoyed Jone’s narration of the story. She does an excellent job of portraying the characters.

While I don’t agree with how the Native Americans are portrayed in the book, the sentiments described are historically accurate. Unfortunately, many settlers did feel animosity towards the native population.

I’ve already started listening to On the Banks of Plum Creek. That will also fulfill a Newbery challenge, as it was an honor book in the 30s. Yay!

Now…on to the print books I finished recently.

First there was Dead Girls Don’t Write Letters by Gail Gales. Sunny’s older sister is dead. Or is she? When she receives a letter from Jazz stating that she didn’t die in the NYC apartment fire and is coming home to prove it, Sunny is stunned. Since Jazz’s death a few months before, their already unstable mother has become nearly non-functioning, and their alcoholic father has moved out and fallen deeper into the bottle, leaving fourteen year old Sunny to pick up all the pieces.

In a whirlwind of events, the story unravels, leaving the reader wondering just what happened.

Wow. I wasn’t overly impressed with the tale at first, but the ending really got me thinking. I might have to go back and read the book again, just to look for holes in the story – and hopefully figure it out. Overall it is a great mystery for teens. Another plus is that it is a short novel, so reading it again will take little time.

The last book left to review – for now – is The Locked Garden by Gloria Whelan.

Verna and her younger sister Carlie, along with their father (a doctor) and their Aunt Maude, move to a home on the grounds of a mental asylum. Their father spends his days working at the asylum. Aunt Maude – their mother’s sister – watches over the girls, always criticizing them, and demanding their love in odd ways. When Eleanor, a patient at the asylum, comes to help with the home, the two young girls fall for her. They choose to spend time with Eleanor over Aunt Maude. This upsets their aunt, and has consequences that neither girl can really understand.

The setting is very picturesque.

I didn’t dislike the story. Really. I didn’t. But there are so many little things that left a bad taste in my mouth or just fell flat. For instance, Aunt Maude. There is obviously something not right with her. She can be a petty and cruel woman, and the way she lashes out at others is disturbing. You would think that working in the field of psychology/psychiatry, that her brother-in-law would notice this and be sure to get her the help she needs. At least he wouldn’t let her treat his daughters as she does!

My other major issue was the ending. It was more of a “not ending”. I was very disappointed.

In happier news, I love the books I am currently reading! I can’t wait to get back to them. Darn real life getting in the way.
Posted by Ama