Dance with the devil: a Dark-hunter novel by Sherrilyn Kenyon 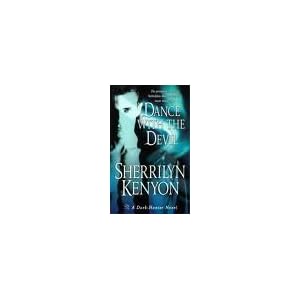 In life, Zarek was the lowest of the low of slaves. Brutally beaten, spit upon and generally abused, it is no wonder that he still suffers emotional scars even after many centuries. As a Dark Hunter, he has spent the last 900 years banished to Alaska. Still, after all those centuries, Zarek is alone and unwanted.

Artemis wants him killed. Acheron wants him first judged by a Justice nymph named Astrid. And Zarek…well, no one ever asks him what he wants.

Astrid has never found a man to be innocent. When she encounters Zarek, he is gruff and biting, but she senses something about him that causes her too look beyond his tough exterior. Zarek doesn’t like the way she makes him feel. He doesn’t believe he is human, or should be treated so decently.

Meanwhile, the monster that Artemis sent to kill Zarek won’t return to his “home”. Instead he is running loose in Alaska, looking for Zarek.

Can Astrid break through Zarek’s shell and help to heal his deep wounds? Can Zarek keep Astrid alive?

Of the books I’ve read thus far, I think this is the best written one.


Kiss of the night. by Sherrilyn Kenyon

Wulf Tryggvason is forced to live in near solitude. The only humans who can remember him five minutes after he walks away are those of his bloodline. Unfortunately, there is only one left. Then he meets the beautiful Cassandra Peters, a half Apollite/half Human woman who remembers him from their previous encounter. Wulf finds himself drawn to her more and more. Is it only because she remembers him? 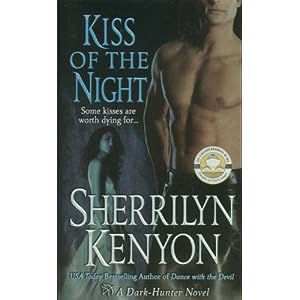 Cassandra Peters holds the fate of the world in her hands. She is the last in the line of Apollo’s Apollite descendents. Her death will destroy the world. Even as a half-Apollite, she will die on her 27th birthday, which is quickly approaching.

A little far fetched – even for paranormal romance – this story isn’t as tight as some of the previous. However, it is still a fun read. The author has a way with words and a great sense of humor that comes through in all of her books.
Posted by Ama