Things that go bump in the night.

As anyone who reads this blog knows, I don’t read a lot of adult books. Mostly it is an occupational hazard. Well, that and the fact that I love teen and children’s fiction.

My mom recently recommended a series to me. What she failed to tell me, however, is that it is a supernatural romance series. Granted…that hasn’t kept me from quickly making my way through the series. So far I’ve finished five of the 19 or so books. I’m going to spilt the books I’ve finished into more than one post. 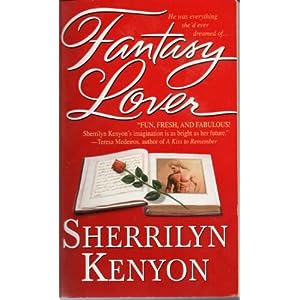 Sex therapist Grace Alexander hasn’t had a date in ages. Heck, it’s been four years since she’s even had sex. Her best friend, who happens to make her living telling fortunes, talks Grace in to releasing Julian of Macedon, cursed for centuries to be a willing sex slave for the lucky woman who calls for him, from his imprisonment in a book. Grace says the magic words, but doesn’t expect anything to happen.

Boy was she wrong! Julian appears in her living room, naked as can be and looking even more scrumptious in person than he did in his picture. Grace refuses to take advantage of him, not wanting to hope into bed with a man she doesn’t know. As the two begin to fall in love, they look for a way to break Julian’s curse.

This is technically not part of the Dark Hunter series, but the characters do make appearances in other novels.

As romance novels go, this is a decent book. I did roll my eyes often, but it wasn’t so bad that I didn’t try any other books in the series.

Amanda’s family embraces – no, illustrates – all the kooky aspects of the occult. What else could you say about a family that includes a fortune teller, a vampire hunter and a voodoo priestess, amongst other things? Of the nine daughters in her family, only Amanda has a “normal” job. She’s more than happy in her boring life as an accountant.

When her fiancé meets her family, he breaks off the engagement. Amanda is upset, but realizes that she’s not too broken up over it. The same week of this fiasco, she goes to her twin sister’s house to let out the dog, and is kidnapped. Amanda wakes up handcuffed to a yummy specimen of a man, who just happens to be passed out cold.

Thus begins the adventure of Amanda and Kyrian of Thrace, a Dark Hunter. Sworn to serve Artemis by hunting Daimons – vampires who stalk the night, searching for human souls – Kyrian cannot be romantically involved. It is against the rules, and his past has destroyed his trust in love. The duo is drawn to one another more strongly than they can resist. Can Kyrian save Amanda and her family, and let her into his heart? Will Amanda be able to save Kyrian’s soul?

I listened to this audiobook. What a workout for my eyes! I felt like I was constantly rolling them due to the clichés and horrible narration. Thankfully I was reading another book in the series that was better written!

A side note…I absolutely hate it when audiobooks do not announce the end of the CD. How hard is it to add a line at the end stating, “This is the end of disc 1.”? Ugh.

Dark Hunter Talon has always been a bit of a loner. He’s also been a bit of a sex fiend. When he saves Sunshine Runningwolf, he gets more than he bargains for – and not just by being run over by a rogue Mardi Gras float.

Sunshine Runningwolf is a free spirit and an artist. 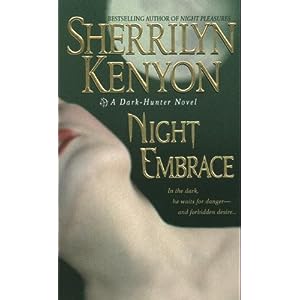 She’s also rather absentminded. When she sees the man who just saved her get run over by a Mardi Gras float, she feel compelled to help him however she can. So, she brings him back to her apartment.

Both agree they don’t want more than a fun time together, but they can’t seem to stay apart. When some baddies of godly proportions up the Daimon population and threaten to summon the mother of all baddies, it is up to Talon to protect the one bit of Sunshine in his life.

This is much better written than the previous books. I like how the three books are a bit intertwined, though.
Posted by Ama