My Life as a Book by Janet Tashjian; illustrated by Jake Tashjian

Derek has big plans for his summer. Mostly they involve goofing off with his best friend Matt or just sitting around doing nothing. They do not involve reading any books, unless those books are heavily illustrated (i.e. comic books) and star Calvin and Hobbes, Garfield, or other comic characters. 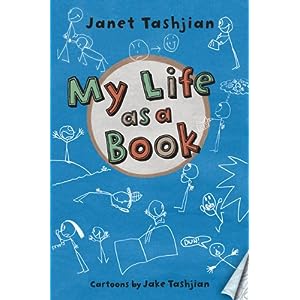 Then his teacher hands out a Summer Reading List. And his parents decide that he is going to Learning Camp. Ugh.

Most of all, though, he wants to enjoy summer without reading a book.

Like:
Derek – who is the narrator of the story – sounds like a twelve year old. The writing is funny. I often laughed out loud while reading.

Derek’s parents are involved in his life in an appropriate way. They don’t ignore him or smother him, but just treat him like you would expect them to treat their twelve-year-old son.

Dislike:
This book was GREAT…until the end. Why do authors of books for children and teens so often make the story a lesson instead of just letting it be a great, fun read? Ugh. I could almost hear Derek say, “You know…I learned something this summer…” a la Kyle from South Park.

Regardless, I’m still passing this on to a coworker for her son to read.

The illustrations are minimal, but fitting for the book. It’s interesting to note that they are done by the author’s teenaged son.
Posted by Ama