This is a continuation of a previous Picture Book Promos post.
Storybook Classics series Retold in Italian by Roberto Piumini Translated into English

This series of books, published by Picture Window Books (Capstone Publishers), were translated from Italian and released this year. Each book contains special features after the story: questions about the story, a glossary, and information on writing your own fairy tale. These features make the books particularly useful for a classroom or homeschool setting.

Each of the eight books is illustrated by a different artist, lending them to have different appearances.

Since there are so many books in the series, I split them over several blog posts.

Unfortunately, one book is missing in our system, so I am not going to review it. The title is Snow White, and it is illustrated by Anna Laura Cantone. 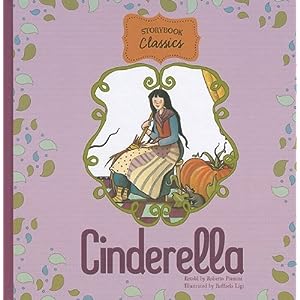 At the beck and call of her step-mother and step-sisters, Cinderella slaves over the housework. When a royal ball is announced, she has no hope of attending. Then a fairy godmother appears and Cinderella is decked out in a beautiful new dress, complete with velvet slippers. The spell only lasts until midnight. As she runs away from the ball, she loses one of the slippers. The prince, who has fallen in love with Cinderella, orders that all of the ladies of the kingdom must try on the shoe. Of course, there is only one who it will fit.

This classic story is complete with lovely illustrations in subdued colors. The text, while enough to tell the story, does not have the flow of a great fairy tale retold. Perhaps something was lost in translation? 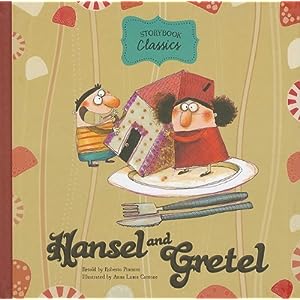 A poor woodcutter lets his wife convince him to take his two young children to the woods and leave them there. Hansel overhears her plans, and leaves a trail of pebbles for him and Gretel to follow home. The next time their step-mother convinces their father to leave them in the woods Hansel leaves a trail of breadcrumbs. Birds eat the bread and the children cannot find their way home.

They come across a delicious looking house, made of candy. The woman who lives there seems kind at first, but ends up locking Hansel in a cage and making Gretel her slave. Will she succeed in fattening Hansel up enough for her dinner? Can the children escape the evil witch and find their way home to their father?

I’ve mixed feelings about this book. While the story is told in an OK manner, it doesn’t really call to me. Then there are the illustrations. I know it is personal preference, but I do not like this illustrator’s work. I’ve seen it in other books and always feel the same. So…it could be that the illustrations are turning me off to the story.

Goldilocks and the Three Bears Illustrated by Valentina Salmaso

Three bears decide to go for a walk while their 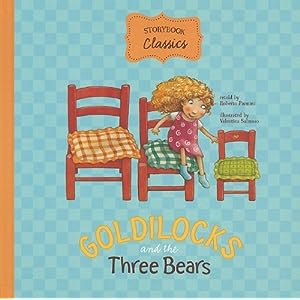 breakfast of porridge cools. While they are away, a little blonde girl named Goldilocks happens by their house and lets herself in. She tastes their breakfast, eating all of the little bear’s porridge. She sits in their chairs, breaking the smallest of the three. She then tries their beds, finally napping in the little one.

When the bears return, they see that someone has been in their home. They find the intruder fast asleep in the little bear’s bed. Their voices startle Goldilocks and she jumps out the window and runs away as fast as she can.

This tale naturally lends itself to being shared aloud with others. The illustrations are adorable and fun. One notable thing, though. The bears are not the usual Papa, Mama and Baby, but rather three male bears: great big bear, medium-sized bear and little bear.
Posted by Ama