Love can be Dangerous

Sins of the Night by Sherrilyn Kenyon

Ias was one of the original Dark Hunters. It is due to him that there is an out clause. Acheron saved him from an eternity as a shade, and now Ias serves as the Alexion, the judge, jury and, if deemed needed, executioner of rogue Dark Hunters. 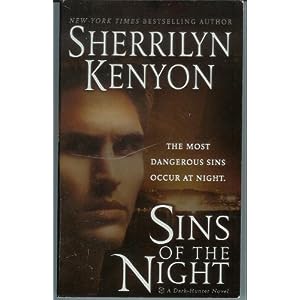 When he is sent to judge a group of Dark Hunters, Alexion doesn’t expect to find his true soul mate in Dangereuse St. Richard, an unbelievable impossibility. Both know their time is limited, but they try to make the most of it while also trying to save those Dark Hunters who can be saved.

This is the first Dark Hunter book I’ve read that has featured a female Dark Hunter. Also unlike the other Dark Hunters, Danger is short. She stands at least a foot and a half under the others. That doesn’t keep her from being one kickass Daimon killer, though.

While the story itself was Ok, what I really enjoyed was learning more about Acheron outside of his visits to the Dark Hunters. And Simi. She is, by far, the best character in the whole series. I adore Simi.
Posted by Ama