The disreputable history of Frankie Landau-Banks: a novel by E. Lockhart

Frankie Landau-Banks changed during the summer between ninth and tenth grades. No longer an awkward and gangly young girl, she had become a beautiful teenager. This gets her noticed by her crush – senior Mathew Livingston. No longer happy with sitting aside and being “bunny rabbit”, Frankie covertly infiltrates her boarding school’s secret all-male society that her boyfriend leads with his best friend, Alpha: The Loyal Order of the Basset Hounds. Using email, Frankie directs the Basset Hounds to conduct several elaborate pranks, all without them realizing that the orders are coming from a fifteen-year-old sophomore girl. 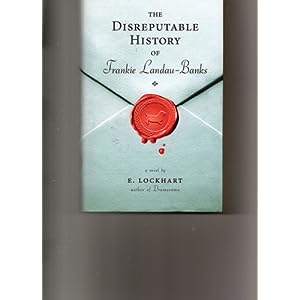 Frankie is witty, intelligent and driven – all great qualities for a main character. She’s also a reader.

The boys call one another dawg. The teens all use nimrod and grody…a lot. The book is set in 2008. The slang is rather outdated. I found this to be extremely annoying.

The first half of the book was boring. I didn’t start really enjoying the story until Frankie started directing the Basset Hounds pranks.

Most of the characters were flat. Frankie's sister seemed so trite (Privileged teen girl goes to Berkley for college and becomes a feminist hippie type).

This was a 2009 Printz honor book.
Posted by Ama