These reviews are by guest reviewer/blogger Sharon.

by Lynette Vinet
Bethlyn was young when her mother died.  Her father remarried Jessica who dies several years later.  A condition of her will is that Bethlyn is to marry her son, Ian, to unite the two families and their businesses.   Ian comes to Britain to marry a 14 year old Bethlyn but has no desire to actually be a husband to her.  But Bethlyn cannot stand living with her father and begs Ian to take her with him to America.  He refuses but instead makes arrangements for her to live with his Aunt and to provide for her financially. 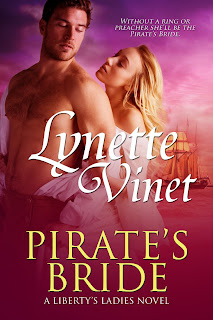 Fast forward seven years.  Bethlyn is still living with the Aunt and has not seen her husband since their wedding.  But she wants more in her life – she wants a loving husband and children.  She decides that she will board one of her company’s boats and head to America to confront her husband – either a real marriage or a divorce.
While her husband’s steward strongly encourages her to wait for a later ship, Bethlyn refuses to be put off.   But, the condition is that she must stay in her cabin.  Bethlyn agrees knowing that she will not and she discovers that the boat is being used to transport prostitutes to the colonies.   Before she can figure out what to do about this, their boat is captured by Black Hawk and his men who transfer the women to their own boat and set the crew adrift.
Will Bethlyn end up making it to the colonies to confront her husband?  Will her husband agree to her terms or make her continue her life as it was?
Likes
Complex characters that make you keep wondering what they will do
You think you have gotten to the end and wonder what could happen next and the author comes up with a twist you didn’t expect

Ama's Notes:
I read this one too! Um...it was Ok.  I really can't recall feeling that it was a fantastic read, but it was entertaining!
Posted by Ama