Want to cheer me along? Find me on Instagram!

February might be a short month, but I still managed to get a lot of reading accomplished!  I finished 32 books - mostly teen and adult.

I started listening to books for my committee in February, but haven't completed any yet. I can't share the titles I read for the committee, so those will not be reflected in my monthly total.

As always, titles in bold have been rated five stars on my Goodreads account.

Worm Loves Worm by J.J. Austrian
Nuts by Alice Clayton
Ms. Marvel, Vol. 4: Last Days by G. Willow Wilson
Alanna: The First Adventure by Tamora Pierce
I Was Told There'd Be Cake by Sloane Crosley
Bone Gap by Laura Ruby
Playing With Fire by Katie MacAlister
Bug in a Vacuum by Mélanie Watt
I Really Like Slop! by Mo Willems
Happy Birthday, Cupcake! by Terry Border
Grumbles from the Forest: Fairy-Tale Voices with a Twist by Jane Yolen
Most Dangerous: Daniel Ellsberg and the Secret History of the Vietnam War by Steve Sheinkin
Holy Smokes by Katie MacAlister
I Lived on Butterfly Hill by Marjorie Agosín
The Shepherd's Crown by Terry Pratchett
Drum Dream Girl: How One Girl's Courage Changed Music by Margarita Engle

The Old Brown Suitcase: A Teenager's Story of War and Peace by Lillian Boraks-Nemetz
Oedipus the King by Sophocles
The War that Saved My Life by Kimberly Brubaker Bradley
Alice's Adventures in Wonderland by Lewis Carroll
How Mirka Caught a Fish by Barry Deutsch
X by Ilyasah Shabazz and Kekla Magoon
Lady Alexandra's Excellent Adventure: A Summersby Tale by Sophie Barnes
Rose Under Fire by Elizabeth Wein
My Brother Sam is Dead by James Lincoln Collier and Christopher Collier
Posted by Ama No comments:

Last month we encouraged the preschoolers to Cuddle Up with Teddy at our teddy bear themed preschool storytime. You can get my planning sheet by clicking here. 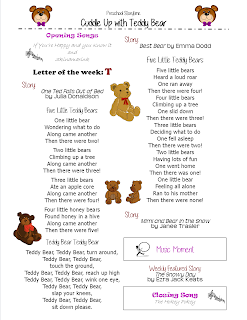 For the craft we made teddy bears out of the letter B. Here's the PDF of the craft. 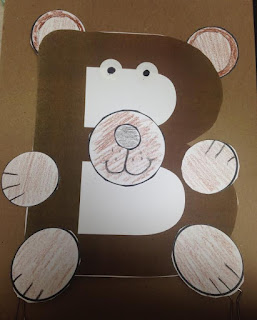 We recently had a winter storm that left us with a lot of snow.  What better time to share my Winter Wonderland storytime plan?  Please note, to view the file, you will need a version of Adobe Acrobat Reader (get it free here). 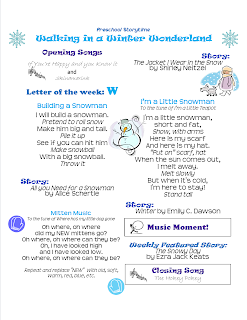 As usual, the titles in bold are ones I rated 5 stars on my Goodreads account.


Feverborn by Karen Marie Moning
Written in My Own Heart's Blood by Diana Gabaldon
Echo by Pam Muñoz Ryan
George by Alex Gino
Annie and the Old One by Miska Miles
The Hundred Penny Box by Sharon Bell Mathis
Mixed Me! by Taye Diggs

Red: A Crayon's Story by Michael Hall
Sequoyah: The Cherokee Man Who Gave His People Writing by James Rumford
Librarian's Night Before Christmas by David Davis
Your Baby's First Word Will Be DADA by Jimmy Fallon
Everyone Loves Bacon by Kelly DiPucchio
Blow Me Down by Katie MacAlister
Goodnight Already! by Jory John
Thankful by Eileen Spinelli
Good Night Yoga: A Pose-By-Pose Bedtime Story by Mariam Gates
Lenny & Lucy by Philip C. Stead
15 Things Not to Do with a Baby by Margaret McAllister
My Tata's Remedies / Los remedios de mi Tata by Roni Ashford
A Pig, a Fox, and a Box by Jonathan Fenske
Little Big by Jonathan Bentley
Unicorn Thinks He's Pretty Great by Bob Shea
Blueberry Girl by Neil Gaiman
Funny Bones: Posada and His Day of the Dead Calaveras by Duncan Tonatiuh
Interstellar Cinderella by Deborah Underwood

Finding Winnie: The True Story of the World's Most Famous Bear by Lindsay Mattick
Defending Hearts by Shannon Stacey
Nimona by Noelle Stevenson
Sex is a Funny Word: A Book about Bodies, Feelings, and YOU by Cory Silverberg
Under the Lights by Shannon Stacey
Simon vs. the Homo Sapiens Agenda by Becky Albertalli
Voice of Freedom: Fannie Lou Hamer: The Spirit of the Civil Rights Movement by Carole Boston Weatherford
Written and Drawn by Henrietta by Liniers
Last Stop on Market Street by Matt de la Pena
Enchanted Air: Two Cultures, Two Wings: A Memoir by Margarita Engle
The End of the Affair by Graham Greene
The Wonderful Fluffy Little Squishy by Beatrice Alemagna
Mango, Abuela, and Me by Meg Medina
Trombone Shorty by Troy Andrews
Supertruck by Stephen Savage

Don't Throw It to Mo! by David A. Adler
Without Me by Chelle Bliss
Miracle in a Dry Season by Sarah Loudin Thomas
The Brands Who Came For Christmas by Maggie Shayne
The Littlest Cowboy by Maggie Shayne
Winter by Marissa Meyer
Light My Fire by Katie MacAlister
This Is Sadie by Sara O'Leary
The City of Dreaming Books by Walter Moers
The Fangirl's Guide to the Galaxy: A Handbook for Girl Geeks by Sam Maggs
How to Date a Werewolf by Rose Pressey
The Unbeatable Squirrel Girl, Vol. 1: Squirrel Power by Ryan North
Baba Yaga's Assistant by Marika McCoola
Sunny Side Up by Jennifer L Holm
Posted by Ama No comments:

Today's my baby sister's birthday.  In honor of her birthday, I decided to share the storytime plan from my birthday week.  Yes...we had a birthday themed storytime in honor of MY birthday.  Because it is all about me and my day. ;)

You can download a PDF of the Party Pallooza storytime plan by clicking here. 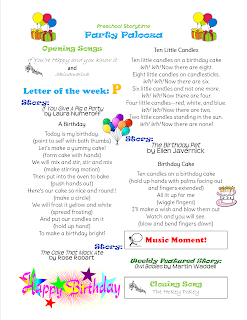 For the craft we made pigs in party hats (click for PDF of the craft).  The kids enjoyed the storytime, craft...and the treat I shared (since it was my birthday, I wanted to give them a little something extra).  There were smiles all around. 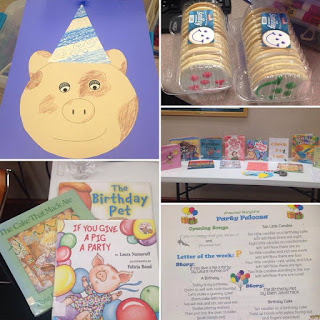 Please note, to view the files, you will need a version of Adobe Acrobat Reader (get it free here).
Posted by Ama No comments:

I'll soon post a review of my 2015 Reading Resolutions; however, before we get too far into January, I want to share the ones I've decided on for 2016. Some may seem familiar from previous years.  That is because I use my prior resolutions as a guide for the next year. I still have so many award winners and honors to read! 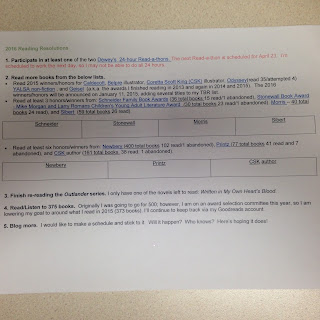 1. Participate in at least one of the two Dewey’s  24-hour Read-a-thons. The next Read-a-thon is scheduled for April 23.  I’m scheduled to work the next day, so I may not be able to do all 24 hours.

3. Finish re-reading the Outlander series. I only have one of the novels left to read: Written in My Own Heart’s Blood.

4. Read/Listen to 375 books.  Originally I was going to go for 500; however, I am on an award selection committee this year, so I am lowering my goal to around what I read in 2015 (373 books). I’ll continue to keep track via my Goodreads account.

5. Blog more.  I would like to make a schedule and stick to it.  Will it happen?  Who knows?  Here’s hoping it does!

With the hustle and bustle of the holidays, I wasn't able to read as much as I would have liked.  I did finish 17 books in December, for a final yearly toll of 373 books.
Here's the list of the books I read in November.  As usual, the titles that are in bold are ones I have rated five stars on Goodreads.


Fire Me Up by Katie MacAlister
Bound by Grace by Amber Stockton
One Came Home by Amy Timberlake
Love Finds You in Folly Beach, South Carolina by Loree Lough
Everything I Need To Know I Learned From a Little Golden Book by Diane Muldrow
Dakota Born by Debbie Macomber

Bluestone Homecoming by M. J. Fredrick
Challenger Deep by Neal Shusterman
Exclusively Yours by Shannon Stacey
Almost a Bride by Patricia McLinn
Share the Moon by Sharon Struth
Naughty Mabel by Nathan Lane
An Echo in the Bone by Diana Gabaldon
Queen of Diamonds by Barbara Metzger
A Fine Dessert: Four Centuries, Four Families, One Delicious Treat by Emily Jenkins
Uncover Me by Chelle Bliss
Her Heart's Desire by Ruth Ann Nordin
Posted by Ama No comments:

I had a few reading challenges I wanted to finish in November.  Mostly I succeeded, thanks to the 29 books I read that month.  One I finished on the final day! (Those will be in another post)

Here's the list of the books I read in November.  As usual, the titles that are in bold are ones I have rated five stars on Goodreads.

A Mail Order Bride For Charlie by Carré White
Ace of Hearts by Barbara Metzger
Harry Potter and the Deathly Hallows by J.K. Rowling
Rudy's Windy Christmas by Helen Baugh
The Not Very Merry Pout-Pout Fish by Deborah Diesen
Dying to Read by Lorena McCourtney
Humans of New York: Stories by Brandon Stanton
Bargaining With a Rake by Julie Johnstone
Fangs for the Memories by Molly Harper
The Single Undead Moms Club by Molly Harper
The World's Strongest Librarian: A Memoir of Tourette's, Faith, Strength, and the Power of Family by Josh Hanagarne
If... by Sarah Perry
Brain Camp by Susan Kim
After Alice by Gregory Maguire
The No. 1 Ladies' Detective Agency  by Alexander McCall Smith
Rat Queens, Vol. 2: The Far Reaching Tentacles of N'rygoth by Kurtis J. Wiebe
Monster on the Hill by Rob Harrell
A Birthday for Cow! by Jan Thomas
The Birthday Box by Leslie Patricelli
Public Displays of Affection by Susan Donovan
Posted by Ama No comments: