Ten-year-old Annemarie remembers life before the Nazi occupation of Denmark. Everyone was more carefree. Soldiers were not stationed at every street corner. There was real coffee, tea and cigarettes for her parents, and enough butter and sugar for pink frosted cupcakes for Annemarie and her sisters.

That was several years ago. 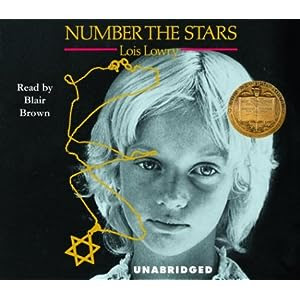 Now Annemarie’s older sister is dead in a car accident. Her younger sister only remembers a Denmark full of German soldiers. And her family are about to risk everything to help save their dear friends and neighbors, the Rosens.

Annemarie’s best friend, Ellen Rosen, is Jewish. Word has got out that the German soldiers are about to relocate all of the Jewish citizens of Denmark. Annemarie’s parents, her uncle and her almost brother-in-law help the Rosens – and other Jewish families – escape across the ocean to nearby Sweden.


Likes
This is a wonderful example of historical fiction that is accessible for a younger audience. Lowry includes an afterword in which she shares the truths within this work of fiction.

Other
This book could be tied in with the Swedish children’s novel A Farway Island by Annika Thor.

The title of the book comes from Psalm 147.

Had you asked me even a few days ago, I would have told you that I had never read Number the Stars. As it is a Newbery winner, I decided to check out the audiobook and listen to it. It’s a short audiobook – only three discs.